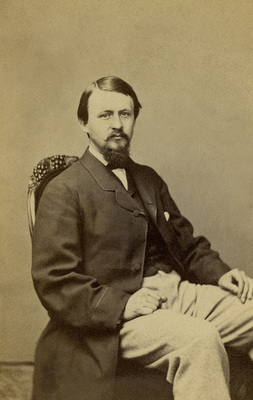 Frederick Lothrop Ames was the only son of Oliver Ames Jr. and his wife Sarah (Lothrop) Ames. He was born on June 8, 1835, in North Easton. After graduating from Harvard at the age of 19, in 1854, he worked for as a clerk for the family business, the Ames Shovel company. After his grandfather's death in 1863, he became a member of the company. In addition to his work with the Shovel Company, Lothrop also was interested in railroads. At the time of his sudden death on September 13, 1893 he served on the boards of over 40 railroads and was among the richest men in the country.